love, laughter, pain, joy, life and its lessons, one word at a time 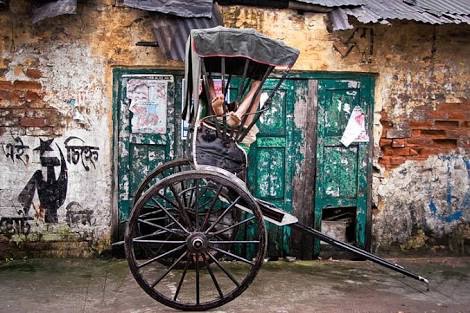 A man stands hunched over his balcony, through a haze of smoke, relishing his tenth cup of tea,
Watching the lazy morning unfold as sleepy rickshaws, yellow cabs, line up like colourful ants, under a gnarly old banyan tree.

The rickshaw weaves its way through yawning padas and slim streets,
No one seems to be in a hurry, specially this man scratching his over indulged belly in a crumpled white dhuti.

The dhuti was freshly washed some days ago by the ghat as a boat carried tourists on a citywide spree,
Quietly billowing in the breeze, listening to endless chatter over some tangy jhal muri.

The jhal muri had its humble beginnings in a corner of Park Street lined with biryani and chaap,
They were a sumptuous lunch for the painter hard at work, lathering the symbol of a sickle outside every shop.

The painter was also a craftsman, who chiselled away in a dark warehouse, at a beautiful and fierce goddess with wavy black hair,
A tiny little luchi (poori) on a plate watched in fascination as he worked, and she continued to stare.

The luchi (poori) had breathed its first greasy breath at a pujo stall, to satiate dancing devotees, possessed, by the beat of addictive drums,
The city had shut, like every afternoon, making merry and living life on its own enchanting terms.

Today the city sat bustling again below his perch, but he seemed to be in no hurry.
Work could wait and so could the world, there was always time for just one more cup of tea.

After chasing criminals as a journalist and spending over a decade in advertising, Richa penned a book of poetry titled A penchant for Prose. She has been a TOI Write India winner and her first novel, I Didn’t Expect To Be Expecting, was a humorous take on pregnancy and the fireworks it brings with it. Her second book Kanpur Khoofiya Pvt Ltd is a humorous thriller and was procured for a screen adaptation. Richa is also a blogger and travel writer, She is a Sheroes champ and writes for platforms such as Womensweb, Momspresso and SheThePeopleTV. She now lives in Mumbai juggling life, writing, and often, her 6 year old daughter as well. (You can find her on Twitter @richashrivas and on Instagram @mukherjeericha )

One thought on “Relay!”

This site uses Akismet to reduce spam. Learn how your comment data is processed.